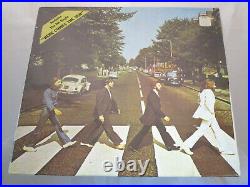 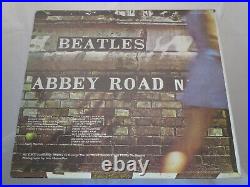 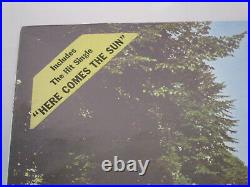 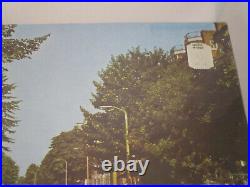 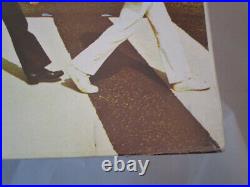 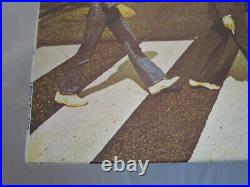 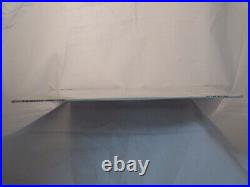 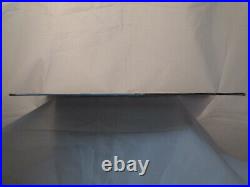 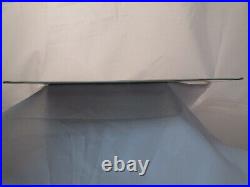 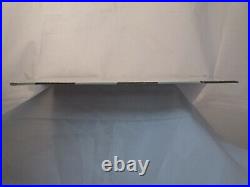 This is considered Cover version #3 (pasted slick over cardboard). The hype sticker itself can't verify that it a capital or apple issued sticker. SHORT HISTORY OF THE 3 ABBEY ROAD COVER VARIATIONS. COVER # 1: FIRST BATCH. The first batch of covers (SC1A, Spizer) do not list Her Majesty on the back cover track listing.

Prior to the album going on sale, Capitol had the film for the back cover revised to list the song Her Majesty after The End. By the time the new artwork was sent out on September 24, many covers had been printed. Thus, the SECOND BATCH of jacket covers listing Her Majesty (SC1B, Spizer) are less common and rarer than the covers not listing the song. The front cover image has the exact characteristics of Cover # 1; more of the crosswalk at the bottom edge of the cover, and includes a portion of the square road sewer positioned on the bottom edge of the cover, beneath Ringo and John's feet.

COVER # 3: THIRD BATCH. Abbey Road ended up being the only Beatles album to have print-on-board covers upon its initial release.

Although Capitol was pleased with the print-on-board jackets, future decisions regarding the mastering, packaging, and advertising of Apple releases were handled directly by Apple by very loyal individuals who had a long-standing relationship with Queens Litho and selected them again to be the primary printer of cover slicks for future Beatles albums starting with Hey Jude. When Capitol's pressing plants ran out of the print-on-board covers, Apple hired Queens Litho to print slicks for additional Abbey Road jackets. These THIRD (and final) BATCH Covers (SC2A, Spizer) used slicks printed by Queens Litho and Bert-Co and were manufactured by Imperial and/or Modern Album. The back cover slicks were made from the album's original artwork and accordingly do not list Her Majesty on the back cover. The front cover image was enlarged to allow for the front slick to be wrapped around to the back cover. Thus, the picture on the front shows less of the trees and crosswalk (the square sewer in the road is missing) and has a larger image of the Beatles. Abbey Road is the eleventh studio album by the English rock band the Beatles, released on 26 September 1969 by Apple Records.

The recording sessions for the album were the last in which all four Beatles participated. Although Let It Be was the final album that the Beatles completed before the band's dissolution in April 1970, most of the album had been recorded before the Abbey Road sessions began.

A double A-side single from the album, "Something"/"Come Together", released in October, topped the Billboard chart in the US. Abbey Road is a rock album that incorporates genres such as blues, pop and progressive rock, and it makes prominent use of the Moog synthesizer and the Leslie speaker. Side two contains a medley of song fragments edited together to form a single piece. The album was recorded amid a more collegial atmosphere than the Get Back/Let It Be sessions earlier in the year, but there were still frequent disagreements within the band, particularly over Paul McCartney's song "Maxwell's Silver Hammer". John Lennon had privately left the group by the time the album was released and McCartney publicly quit the following year. Although Abbey Road was an immediate commercial success and reached number one in the UK and US, it initially received mixed reviews, some critics describing its music as inauthentic and bemoaning the production's artificial effects.

Many critics now view the album as the Beatles' best and rank it as one of the greatest albums of all time. In particular, George Harrison's contributions, "Something" and "Here Comes the Sun", are considered to be among the best songs he wrote for the group. The album's cover features the four band members walking across a zebra crossing outside Abbey Road Studios and has become one of the most famous and imitated images in the history of recorded music.

I Want You (She's So Heavy). She Came In Through The Bathroom Window.

THE VIRGIN VINYL ALBUM IS STILL ORIGINAL FACTORY SEALED. PASTE ON COVER IS STILL SEALED AND COVERED IN ITS ORIGINAL FACTORY SHRINK WRAP W/ SOME CORNER WEAR AND STICKERS AND CREASES BOTTOM LEFT CORNER. NO OTHER IMPERFECTIONS ON THE COVER.

No cut-out (drill) holes No cut-out corners No saw-marks or indents No dirt/dust rubbing stains (friction marks caused by rubbing against other covers) No yellowing from aging No writing No tape No water damage No warping No wax, glue, paint or liquid drops on the cover No glue traces or wax residue. Please use all the pictures to help with the condition. If any questions, please ask! Thank You From Zombie Sounds.

This item is in the category "Music\Vinyl Records". The seller is "atl0325" and is located in this country: US. This item can be shipped to United States.