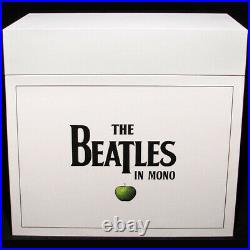 Beatles - In Mono Vinyl 14 LP Box Set 2014 NEW/NEVER PLAYED. Truly a rare vinyl collection released for the demanding collector. The most famous pop group of the Music History is back on vinyl and finally in Mono, which was predominant at the time and that was preferred by the band members themselves for most of their records.

They saved the best for last. Cut from the original 1/4-inch analog master tapes and pressed at Optimal in Germany on dead-quiet 180g LPs, The Beatles In Mono 14LP box set is made by and for audiophiles.

More collectable than its stereo and digital processors, and featuring utterly transparent-to-the-source sound, it is completely different than its stereo analog counterpart by way of the all-analog cutting process and audiophile-focused manufacturing. Purists rejoice: No digital is involved in any part of the chain. This box presents The Beatles as they were meant to be heard, in spectacular mono sound. Mastered from quarter-inch master tapes at Abbey Road Studios by Grammy-winning engineer Sean Magee and Grammy-winning mastering supervisor Steve Berkowitz, The Beatles In Mono LP box set exemplifies sonic transparency and analog purity.

While The Beatles In Mono CD box set released in 2009 was created from digital remasters, Magee and Berkowitz cut the records for The Beatles In Mono LP box by employing the same procedures used in the 1960s, guided by the original albums and detailed transfer notes made by the original cutting engineers. Working in the same room at Abbey Road where most of the Beatles albums were initially cut, the pair first dedicated weeks to concentrated listening, fastidiously comparing the master tapes with first pressings of the mono records made in the 1960s. Using a rigorously tested Studer A80 machine to play back the precious tapes, the new vinyl was cut on a 1980s-era VMS80 lathe. An exclusive 12x12 hardbound book featuring new essays, rare studio photos, archival documents, and an engrossingly detailed history of the mastering process by author Kevin Howlett rounds out this world-beating analog reissue, certain to be one of the most celebrated releases of the decade. Manufactured for the world at Optimal Media in Germany, The Beatles albums are presented in their original glory, both sonically and in their packaging.

The boxed collections exclusive 12-inch by 12-inch hardbound book features new essays and a detailed history of the mastering process by award-winning radio producer and author Kevin Howlett. The book is illustrated with many rare studio photos of The Beatles, fascinating archive documents, and articles and advertisements sourced from 1960s publications.

The seller is "gls1953" and is located in Concord, North Carolina. This item can be shipped to United States.