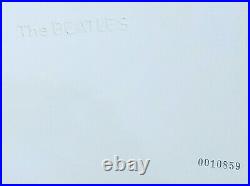 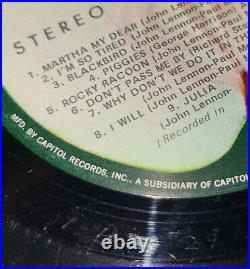 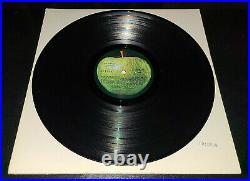 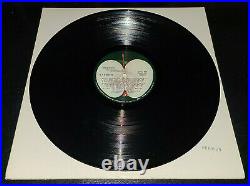 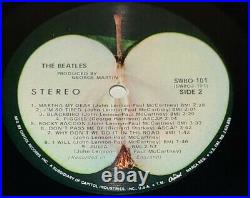 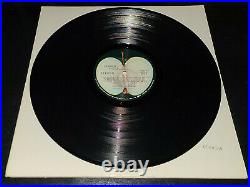 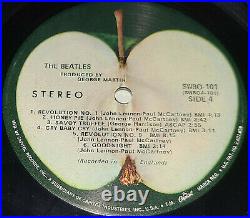 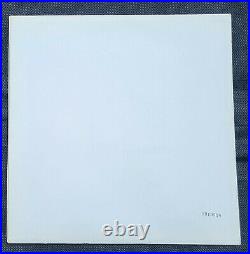 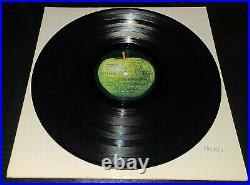 Please take a few minutes to read all below and you'll be amazed at it's incredible rarity This is your incredible rare opportunity to own a piece of Beatles history few fans even knew exists! Insanely Rare Original Mastered from A28/B29 Lacquers Scranton 1968 Pressing of'The Lost Harrison Compressed White Album. Here's a rare opportunity to own the record that George Harrison didn't want you to hear! A record so rare, there are less then a handful confirmed copies ever uncovered across the globe. As the story goes, just prior to the release of'The Beatles' self-titled double LP, universally known as'The White Album', George Harrison flew out to Los Angeles, and while there, he visited the Capitol Records LA plant to listen to an advance pressing of the record.

He was horrified by what he heard. The album had compression and limitations added which altered the sound of what The Beatles had intended. George then set out to remaster the entire album.

The first set of lacquers that were used to press this album were all ordered to be destroyed along with any records that may have been pressed. That, it would seem, was that... Except a few copies of the rejected album mistakenly leaked out. The way to discern this is by checking the matrix in the run-out groove for a number lower than 34.

No copies of this pressing were known to exist prior to 2007, as noted by the brilliant Beatles expert Bruce Spizer. A few copies have been discovered in the intervening years. All the legitimate copies of the Compressed White Album were SWBO-1 , SWBO-2 , SWBO-3 and SWBO-4. Any you may see that are X1, X2, X3, X4 were NOT pressed at the Scranton PA plant and are not true compressed White Albums that George Harrison had destroyed. Here's your chance to own one of them.

The PRISTINE stark white cover is MINT STUNNING front, back, inside and out. NO seam splits , ZERO SEAM SPLITS!!

NO writing, NO stickers, NO glue residue, NO rips/tears, NO pen/marker marks, and a MINT inner/outer spine!! This is without a doubt, the most amazing cover I have ever seen!!!

Just an absolutely breathtaking copy of an extremely ultra rare treasure!! The photos taken of the cover were shot in natural sunlight to capture how white it is, while the records were photographed indoors with a flash to catch the beautiful sheen and luster of the wax. From every angle, everything looks stunning!!

Hard to find this nice! The records, while still glossy, show some play with minor hairlines and scuffs, with NO skips, which is completely understandable considering it is unarguably one of the earliest'White Album' known to exist today, more then 53 years after it's pressing at the Scranton PA plant. All the error labels are absolutely MINT with NO writing, NO stickers, NO residue, NO rips and NO tears. NO WRITING on the front, back or inside of the record sleeve! It comes with all 4 MINT heavy-stock portrait photos, which includes the ultra rare photo separator sheet and the NM original poster with lyrics.

This pressing is from the Scranton PA plant. The original plates were used to press this record, BEFORE Capitol recalled mother plates 01 - 33. That any A28 or B29 mother plates existed and were not destroyed as instructed, were unknown to exist until 2007... This is unarguably the most important Beatles White Album ever to turn up.

This could very well end up in a museum one day! Bruce Spizer said to me: The albums with master numbers 28 or 29 (or any number below 34 if they ever existed) were from Capitol's original mastering of the album pressed at the Scranton plant. When George heard what Capitol had done, he insisted that the album be totally remastered. Capitol was suppose to destroy master numbers 1-33, but we now know that some 28-29 masters were not destroyed.

At the time the price guide was written, only ONE of these rare masters had been confirmed. Excerpts from Bruce Spizer: All of this is detailed in my book "The Beatles on Apple Records" on page 118. At the time I wrote the book, I stated that there were never any numbers below A34 cut at the Capitol Tower because all of these lacquers were destroyed. A few years ago, someone had me examine a White Album with A28, B29, A28 and B29 for sides one through four.

This was proof that not all lacquers 01 to 33 were destroyed. These discs sound slightly different that the White Album we all know and love. It is not a dramatic difference because the lacquers were cut from the same master tape. We did a digital wave comparison of the discs with A28 & B29 to a standard White Album. The difference is clearly visible.

You can see the compression on the original Capitol master. The digital wave comparison appears on page 270 of my latest book, "The Beatles Swan Song: "She Loves You and Other Records. In addition, a lacquer of side one of The White Album has recently turned up that further confirms Harrison's remastering. The lacquer was cut at Sound Recorders Studio, 6226 Yucca, Hollywood, CA, which is just around the corner from the Capitol Tower.

An image of the lacquer is in my Swan book, also on page 270. This is one of the lacquers cut under Harrison's supervision. Ken Mansfield confirms that Harrison went to that studio for the initial remastering.

Obviously, the lacquers used to cut the album were done at the Tower, as evidenced by the A and B lathe numbers. I hope that this proves, once and for all, that the Harrison remaster story is not a myth, and is in fact true. Bruce Spizer also writes about this rare version in his book The Beatles on Apple Records: George Harrison, along with Mal Evans, were in Los Angeles to produce Jackie Lomax's upcoming Apple album.

He dropped by the Capitol Tower to hear the White Album. He had left London for LA prior to the banding session during which the order of the songs was selected for The White Album, and wanted to hear the finished product. He did not like what he heard and insisted that he be allowed to work with Capitol's engineers to remaster the album. This story is told by Mal Evans in an issue of The Beatles Book (the official Beatles Fan Club monthly publication) in which he states that Capitol's engineers had done all sorts of technical things to it that altered half the effects. As was often the practice at the time, Capitols engineers had run the sound through a limiter and compressed the volume range of the recording by cutting back the high volume peaks and bringing up the low passages. This would have been particularly noticeable on "Helter Skelter, " a loud rocker with a fake fade-out ending, and Harrison's "Long, Long, Long, " which has quiet passages throughout and loud distortion at the end.

So, the album was saved and sounded like George Harrison wanted it to sound. It was released in the UK on 22 November 1968, and three days later in the United States. However, it seems a few of the U. Albums had been pressed using Capitol's compressed master by mistake. In Perry Cox' 2007 book, one such copy of the album was described: this variant has lacquer numbers in the trail off area ending in numbers LESS than 34.

These records were pressed with metal parts generated from the initial 33 lacquers, which were supposed to be destroyed. George Harrison objected to the use of a limiter that had compressed the sound during the mastering process. He insisted that the initial lacquers be destroyed and that the album be remastered. Harrison's remastered version is found on standard copies of the album which have lacquer numbers 34 and higher. Only one copy, Scranton pressing with lacquer numbers A-28 and B-29, has been confirmed, and thought there may be one or two others out there.

This is a once-in-a-lifetime opportunity to own a very rare part of Beatles history not often seen, or offered for sale anywhere in the world. Look at the photo of the B29 matrix on side two , something you may have never seen before, and may never see again in your lifetime. I know it's worth more the I have it listed for, but I'm hoping it ends up in the hands of a true Beatles fan, rather then in a museum!! This is the ultimate Holy Grail of Beatles records!!

Don't miss this opportunity for you will kick yourself when it's gone forever! I began collecting White Albums over 40 years ago. I noticed how odd the mother stamps were, having no idea what they were, but I knew they were important and historic, so I stored them away, then finding out from Bruce Spizer, these were indeed The Lost Compressed Harrison White Album!!! You may never see one again, and you'll never see one with the B28 hand etched out into B #29 , most likely at George Harrison's urging! Here are all the 7 song errors on the labels. "Bungalow Bill" instead of "The Continuing Story of Bungalow Bill" 2. "Obladi Oblada" instead of "Ob-la-di Ob-la-da" 3.

This item is in the category "Music\Vinyl Records". The seller is "thefifthbeatle" and is located in Philadelphia, Pennsylvania.