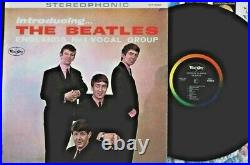 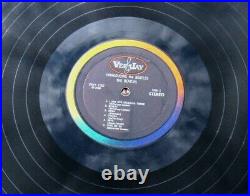 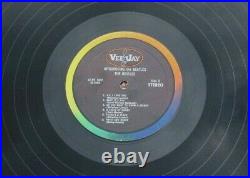 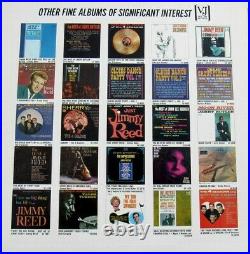 "Make your BEST OFFER TODAY"! Version 1 STEREO AD BACK. Officially Released on JANUARY 10, 1964. Only 2,202 STEREO VERSION 1 DISCS were ever PRESSED! Jacket is Beautiful / No Splits / No Writing. Vinyl Record is Gorgeous / NM. There have been some other STEREO AD BACKS listed, however the first. Rule to remember when making an investment of this kind, is that the album's. There is no substitute for AUTHENTICITY. Keep that in mind when purchasing these rare albums.

This is one of the Best Examples of this classic LP ever. This is the RARE VERSION 1 "STEREO AD BACK" by the BEATLES. Vee Jay Records Catalog #SR-1062. Was their very 1st American Album released on JANUARY 10, 1964 just prior to Capital records releasing their 1st BEATLES album around the same period only weeks apart.

Because of the famous impending lawsuit between. Vee Jay and Capitol , the release of this LP was a race against time. It is a collection of tunes. That were previously recorded in the UK on the Parlophone Label in 1963. The back of the jacket illustrates 25 miniature pictures of other LPs available from Vee Jay.

The rarity here is both the OUTER JACKET , and the fact that it's a RARE STEREO PRESSING. In fact in official documents retrieved from official Vee Jay (invoices), indicates that only 2,202 VERSION 1 STEREO RECORDS WERE EVER PRESSED , making it one of the RAREST VINYL ALBUMS EVER PRODUCED. It's also important to note that even a MONO VERSION 1 disc, with only a total pressing of 79,169 , makes this variation a rare LP in it's own right. The bottom line is that ANY VERSION 1 is quite a find, but finding a STEREO in great condition like this particular example, is nearly impossible these days. The label indicates that it's a bonifide STEREO (the word STEREO is located to the right of the center hole).

T he word STEREOPHONIC is located at the top of the FRONT COVER on the white banner in GRAY PRINT. The words "Printed In USA" are running vertically on the the lower left side of the cover. On the label is VJLPS 1062 and the matrix numbers on SIDE 1 are 63-3402 , with 63-3403 on SIDE 2. VERSION 1 pressings featured songs "LOVE ME DO " and P.

I LOVE YOU" and NOT "PLEASE PLEASE. ME" and "ASK ME WHY which were later substituted on the VERSION 2 pressings. The vinyl is in Beautiful condition and t he OUTER JACKET is quite nice as well having with NO SPLITS and NO WRITING. Be hard pressed to find one of these RARE STEREOS in this great condition. Most have been trashed over the course of time since its original 1964 release during the height of BEATLEMANIA. This is a true RARITY and one of the most collectible BEATLES ARTIFACTS. Actually it should be in a museum, but it would better on a collector's shelf! "I SAW HER STANDING THERE". "DO YOU WANT TO KNOW A SECRET". These LPs are getting much harder to find in such beautiful condition. A Great Addition to any BEATLES COLLECTION! If you're looking for ORIGINAL BEATLES PRESSINGS , let us know! NOTE: Always keep in mind that this particular album has been. BOOTLEGGED often, however this one is the REAL THING! Records such as this one, can sometimes be very expensive. If you ever have any questions, or would like to know what. Justifies such a price, there are valid reasons and we would. WE WILL ACCEPT ANY & ALL "REASONABLE" OFFERS! REMINDER TO ALL PERSPECTIVE BUYERS: Pricing is based upon a number of factors such as condition, edition, quantities produced and existing price guides. Some price guides in today's market have not been updated for over 13 years, therefore they are not to be taken literally since the market has changed drastically in that time, especially with respect to BEATLES VINYL , most of which has become much more highly sought after. The rarest BEATLES VINYL has become more difficult to locate in prime condition since it appears that collectors of original pressings from the mid 1960s, seem to be holding on to their collections more so today than ever before.

We appreciate your viewing our collectibles at this time and we welcome any and all reasonable offers. Please keep watching as we continue to post more BEATLES RARE VINYLS in the future. If you have any questions at all, please ask. Thank you for your attention and we look forward to hearing from you.

Our interest throughout the years has been collecting Rock N Roll & Jazz Albums and 45s. As Disc Jockeys back in the 1960s, we were able to accumulate a number of PROMOTIONAL Vinyl Records, many of which are still in our collection, and we're willing to part with them at this time. Thank you for your interest!

The item "Beatles LP INTRODUCING THE BEATLES Version 1 STEREO AD BACK NM" is in sale since Friday, March 26, 2021. This item is in the category "Music\Vinyl Records". The seller is "thebatt47" and is located in Rochester, New York. This item can be shipped worldwide.