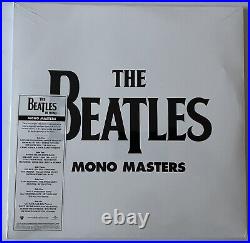 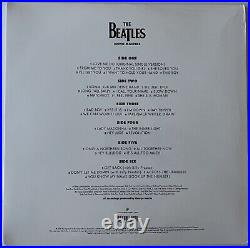 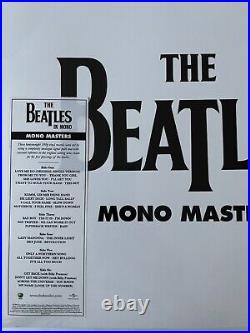 NINE PEOPLE ARE WATCHING THIS ITEM. I ONLY HAVE ONE COPY. WHAT ARE YOU WAITING FOR?

3 LP 180 Gram Audiophile Vinyl. Was included as part of the.

Box set, then later separately in 2014. The premise of this box set was to compile only Beatles material that was released or prepared for release with a dedicated mono mix (the set excludes later material mixed and issued only in stereo, and material whose mono version was simply created as an equal mix of the two channels of the stereo version). As a result, the tracklisting for.

On the second half of disc two, omitting three songs that never had a true mono mix ("Old Brown Shoe", "The Ballad of John and Yoko" and "Let It Be"), and adding five songs which had previously unreleased true mono mixes. "Only a Northern Song, "All Together Now", "Hey Bulldog", "It's All Too Much" and "Across the Universe" were prepared in March 1969 for release as a 7" mono.

EP, but due to mixed reception of the. The project was scrapped, though the EP had been mastered. Subsequently, the tracks were only released in stereo (and in an electronically produced mono mixdown, or "fold-down", of the stereo mix), while the true mono mixes remained unreleased. "Get Back" (with B-side "Don't Let Me Down") was the final Beatles single mixed for mono format.

It was released in the UK in mono, although the US release was in stereo. Thus, the songs that were originally released on stereo singles in the UK are omitted on this release. The Beatles in mono: This is how most listeners first heard the group in the 1960s, when mono was the predominant audio format. Beatles album was given a unique mono and stereo mix, but the group always regarded the mono as primary. MONO MASTERS is released in mono on.

Instead, they employed the same procedures used in the 1960s, guided by the original albums and by detailed transfer notes. Made by the original cutting engineers. Working in the same room at Abbey Road where most of The Beatles' albums were initially cut, the pair first dedicated weeks to concentrated listening. Fastidiously comparing the master tapes with first pressings of the mono records made in the 1960s. Using a rigorously tested Studer A80 machine to play.

Back the precious tapes, the new vinyl was cut on a 1980s-era VMS80 lathe. Manufactured for the world at Optimal Media in Germany, The Beatles' albums are presented in their original glory, both sonically and in their packaging. All songs written and composed by Lennon/McCartney except where noted. From 5 October 1962 A-side, the original single version on Parlophone, catalogue number 45-R4949; recorded on 4 September 1962, featuring Ringo Starr. (from 11 April 1963 A-side).

This item is in the category "Music\Vinyl Records". The seller is "rockcan" and is located in this country: US.