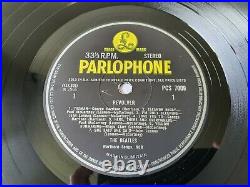 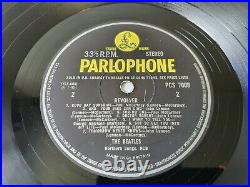 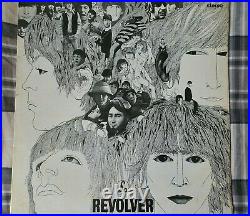 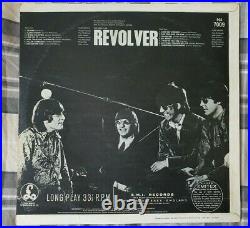 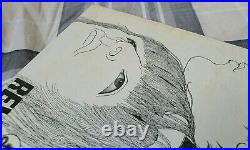 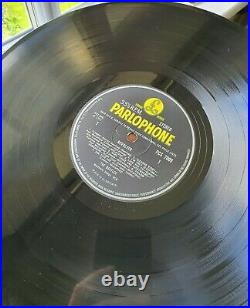 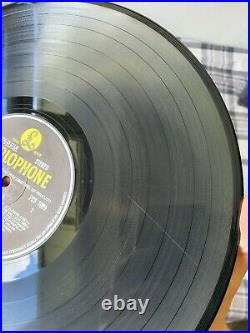 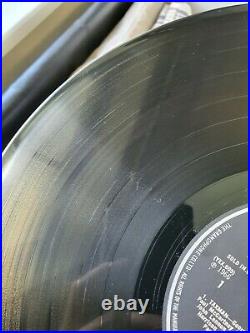 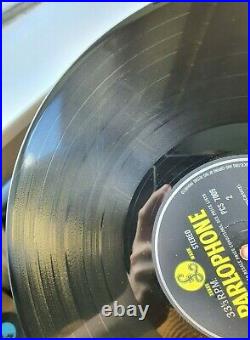 Rare Later Style Sans Serif Font Labels with "Doctor Robert" Correction On Side 2. PARLOPHONE PCS 7009 : MATRIX NOs YEX 605-1 / YEX 606-1. Vinyl Audio: Very Good +. Visually the vinyl looks decent! The record does show some sleeve removal scuffs / hairline marks that are visible under certain light angles but they're generally superficial and have no effect on the sound I have a near mint copy with these same scuffs! Those original inner sleeves are likely to be the blame. And aside from the odd hairline "stylus mark" and a couple of superficial light patches, it looks nice underneath!

It's clear that this LP wasn't played all that often and likely stored away for a very long time. It does have some visible spindle trails on the labels but there aren't too many and the majority are all very close to the centre hole suggesting it's been handled very carefully and has little play. The sound quality is very nice and the record plays through nicely from beginning to end without ever jumping or skipping anywhere.

The majority of outer groove / busier tracks actually play at an Excellent - grading, but there are some rotational ticks at the beginning and ending of Side 1, tracks 5 and 6 and some light bits of surface noise audible here and there. It's never hugely obtrusive and if you're playing the LP with speakers you're likely to miss it. Eleanor Rigby, Here There And Everywhere, For No One are almost impossible to find playing silently on original Y/B pressings, even in the best condition, due to compression / cutting volume / the vinyl formulation that was used at the time. While they aren't perfect, they're still enjoyable on this LP.

There are some audible spots of distortion on one channel for a second or two in "Eleanor Rigby" which is no fault of the record, rather a cutting error present on all original Stereo pressings, but it's still worth mentioning. This LP isn't a minty fresh example, but it's still a decent player for the most part and quite enjoyable indeed! The original Garrod & Lofthouse flipback cover is in Very Good condition.

It looks nice and is holding up really well! It isn't perfect though. It still has a lot of it's original white tone but there's some visible discolouration that's inconsistent due to dirt that was cleaned off. There's some light signs of laminate wear on the front panel and a few small spine cracks but nothing too bad. The flipback flaps are looking nice and strong and the back panel is quite nice too.

The spine is holding up decently bar those few small cracks and the text is still fully legible. It has some very light foxing on the openings too, but otherwise there really isn't anything I can fault with it.

It feels great to hold and look at! Unfortunately the original inner sleeve is no longer present but an anti-static archival inner sleeve will be included for you! Any questions, please give me a shout! This item is in the category "Music\Vinyl Records". The seller is "aandrew_b" and is located in this country: GB.