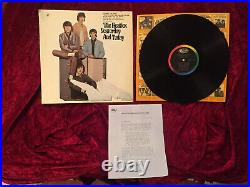 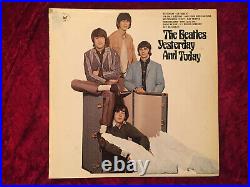 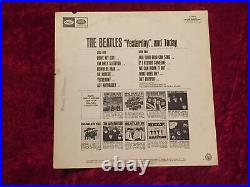 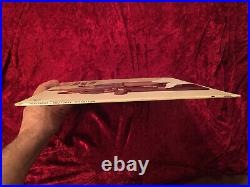 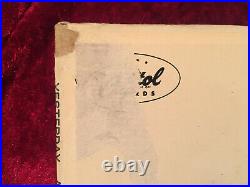 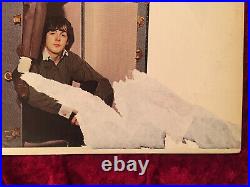 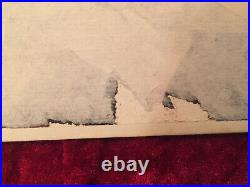 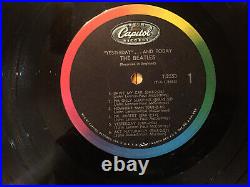 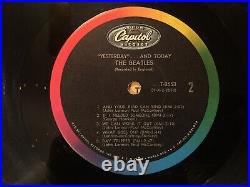 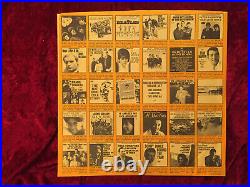 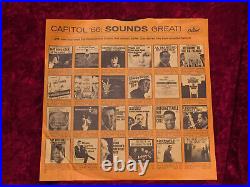 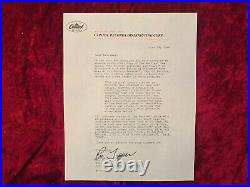 Capitol Rainbow Labels are Clean and Bright. This is the 1966 Capitol 1ST PRESSING! This is the audiophile acclaimed MONO Pressing, Pressed at Capitol's Los Angeles, CA Pressing Plant!! A "Compilation" of Quintessential Middle Period Beatles, at the very end of the Beatlemania period, released a couple months before their last public concert and before they retreated to the studio to create their Masterwork, Sgt. Pepper's Lonely Hearts Club Band.

The underbelly of this compilation, of course, is that the greedsters at Capitol had it in mind to get a "bonus" album out of The Beatles by patching together a bunch of songs they had ripped off of the Beatles' original Parlophone releases over the years, in order to present more product to the hungry American public (compare, for example Capitol's "Revolver" with Parlophone's "Revolver"). Interestingly, the "chaff" that they pulled carry some of the most emblematic of The Beatles' inimitable sound: the Motown chug of Drive My Car, the blistering multi-tracked electric guitar run that bursts open and runs throughout And Your Bird Can Sing, the sheer Rock'N Roll genius of Nowhere Man and George's beautifully chiming If I Needed Someone! And of course unbeknownst to the Capitol bosses, they had played into a Faustian bargain whereupon The Beatles for their part (as one storyline plays it) decided to one up the greedsters with a visual representation of how they felt about their albums being ripped apart... In the Dead Wax: Side 1: Etched: T-1-2553-F-17 and stamped 2 and glyph (Pressed at Capitol's Los Angeles, CA Pressing Plant) Side 2: Etched: T-2-2553-G-22 and stamped 1 and glyph (Pressed at Capitol's Los Angeles, CA Pressing Plant).

Cover: VG+ (see photos) Includes the (correct) Capitol inner sleeve in beautiful condition, with no splits, no tears, no writing. An exceptionally well cared for, beautiful Second State Butcher Cover, that has been shelved and stored properly owing to it's remarkably sturdy condition, despite the surface-y attempts to peel the Trunk cover. The cover is about 12 5/16" wide, consistent for a 2nd State Butcher Cover, as the 1st State Butcher Covers (12 3/8" wide) were trimmed on the edge where the record goes in, to accommodate for the 2nd State slick (the Trunk Cover) to be pasted over at the factory. Also, see the photos, especially the area to the right of the Trunk, where we find Ringo's dark sweater hiding under the slick.

This reveals that the Butcher Cover lies under the pasted over 2nd State Trunk Cover slick... There are also various areas of the slick where the textured cover can be seen and/or felt under the Trunk cover. In the top left corner there is an area where a peel was begun (and luckily was stopped before any damage was caused to the Butcher cover). Here, you can see the Capitol logo under the "veil" of paper residue from the Trunk cover.

In the bottom right portion of the cover, you can easily see Ringo's smock and legs and Paul's left leg, similarly under a "veil" of paper residue from the Trunk cover above it, similarly from an attempted partial peel. In this section, there is an area where the attempted peel did remove a tiny piece of the Butcher cover (see photos, especially the closeup of the only part of this Butcher that has been damaged by an attempted peel--about the area of one side of a 25 cent piece). If a professional peel were to be done on this cover, this section would not stick out much because it remarkably aligns with an area between Ringo's legs and so visually, this paper tear (again, about the area of one side of a 25 cent piece) would be negligible visually. There is one other place on the front cover with a paper tear in the top left corner, but this doesn't involve the Butcher photo. The paper tear involves the white background of the Trunk Cover, less than the size of one side of a 10 cent piece.

So apart from these imperfections, the Cover is in remarkably beautiful condition and is intact beneath the 2nd State Slick. Many covers from this era have been heavily used, worn, written upon, have cracks in the slick along the spine, have split seams, ring and shelf wear. This Cover retains most of its luster and color glossy beauty. The 1st State Textured cover can be felt and seen at various angles, under the 2nd State Slick. The rear cover is also in nice condition.

There is an abrasion on the left side of the rear cover and minor ring wear. The Front and Back of the cover artwork and text are rich, clear and bright. The seams, corners and spine are all intact, and there are no bumped corners. The spine print is crystal clear!

The back cover has the number 6, verifying that the cover matches the disc. That is, this is a Mono record, pressed at Capitol's Los Angeles, CA Pressing Plant. If you have any questions about any of these particulars, including the geographical landmarks that I refer to, then please don't hesitate to ask. By the way, interestingly, the Textured Butcher slick was photographer Robert Whittaker's idea to make the Butcher scene look more artistic, initially envisioning the Butcher scene to be one of a three paneled triptych Cover design, a meditation on the surreal nature of The Beatles' success.. Includes a copy of the original letter from Ron Tepper, dated June 14, 1966, attempting to explain to the DJ's they had sent Promo copies of "Yesterday"...

I love the denigrating use of the term'pop art' thrown in there, in quotations--how déclassé!!! See my other listings for other Beatles & Related items. I also have a treasure trove of Beatles LPs, 45s and memorabilia yet to be listed.

Let me know what you're looking for. I wipe the dust off of every cover with clean, unscented baby wipes. I professionally clean the vinyl.

(I also operate a Vinyl Record Cleaning business for your dusty/dirty records--if interested, send me a message). I cover the cost for this, so it doesn't cost you anything extra. Do this for all of your selections and then go to your cart to checkout.

All records are packaged securely with the vinyl outside the jacket (to avoid seam split in transit). , ETC WITH THE ITEMS YOU WANT, AND CREATE A LISTING WITH THE EXACT WEIGHT OF YOUR LOT. OR, FEEL FREE TO ASK QUESTIONS. Feel free to ask any questions and happy shopping! If you're unsatisfied, please let me know so we can resolve it. First and early pressings are pressed from the first generation lacquers and stampers.

They usually sound vastly superior to later issues/re-issues (which, in recent times, are often pressed from whatever'best' tapes or digital sources are currently available) - many so-called'audiophile' new 180g pressings are cut from hi-res digital sources. Essentially an expensive CD pressed on vinyl. Why experience the worse elements of both formats? These are just High Maintenance CDs, with mid-ranges so cloaked with a veil as to sound smeared.

They are nearly always compressed with murky transients and a general lifelessness in the overall sound. There are exceptions where re-masters/re-presses outshine the original issues, but they are exceptions and not the norm. First or early pressings nearly always have more immediacy, presence and dynamics.

The sound staging is wider. Subtle instrument nuances are better placed with more spacious textures. Balances are firmer in the bottom end with a far-tighter bass. Upper-mid ranges shine without harshness, and the overall depth is more immersive. On first and early pressings, the music tends to sound more'alive' and vibrant.

The physics of sound energy is hard to clarify and write about from a listening perspective, but the best we can describe it is to say that you can'hear' what the mixing and mastering engineers wanted you to hear when they first recorded the music. AllMusic Review by Bruce Eder [-].

And Today was the last Beatles album to be created exclusively for the American market without the group's direct consent, and its tumultuous history seemed to bring the issue of those albums to a head, both for the group and Capitol Records. Owing to business and market differences between England and America, the label had reconfigured every one of the group's long-players in America up to that point, and also generated a few LPs out of singles, B-sides, and EP tracks that had no U.

Equivalent on 12 vinyl -- the Beatles had tolerated it all quietly in the early days, content to go along amid the whirlwind of success they were riding, even in the face of such abominations as the original U. By 1966, however, they were on a firmer footing, and well past being wide-eyed teenagers from the north of England; they'd also begun to express themselves creatively in media beyond music, and take themselves a bit more seriously, and having a bit more fun as well -- by the spring of 1966, after all, they were neck-deep into the making of the Revolver album. When confronted with what should have been a routine matter, the proposed 11-song U. And Today, assembling a bunch of single sides and leftover U. Somehow, Capitol Records' executives went along with gag and approved the initial design, and a print run of the album was ordered up, anticipating the usual six-figure release-date demand for a "new" Beatles LP.

Then the negative reactions started coming in from record chain buyers and disc jockeys, and Capitol was soon faced with a crisis -- everybody seemed to find the cover tasteless and even grotesque, and it was possible some department store chains would refuse to stock the album. A new, tamer photo replaced the original cover, and untold thousands of copies of the original "butcher cover" sleeves were pasted over with the new picture.

In the end, between the junking of artwork and some jackets, and the overtime needed to salvage the inventory, Yesterday... And Todayended up as the only U.

Beatles album to show a loss on Capitol's books. From that point forward, there would be better coordination between England and America to prevent such near-disasters. As for the album itself, Capitol assembled four songs that had been removed from the British version of Rubber Soul, the singles "Yesterday, " "We Can Work It Out, " and "Day Tripper, " a pair of B-sides, and offered a "preview" of the upcoming Revolver album (released seven weeks later) in the form of "And Your Bird Can Sing" and "Doctor Robert" (neither one in its final mix). Amazingly, despite origins ranging across 18 months of the band's history, it all hung together very well, with the country-influenced "Act Naturally" and "What Goes On" -- both heavily featuring Ringo Starr -- adding some unexpected roots rock elements amid the cutting-edge, riff-driven glories of "Day Tripper" and others, and the latter contrasting beautifully with McCartney's romantic classic Yesterday. Despite being thrown together in a blender, the album could stand next to almost any of the competition in the summer of 1966, though it became clear with the release of Revolver, two months later, that the band had left most of the sounds represented here far behind them. This item is in the category "Music\Vinyl Records". The seller is "thelicoricepizza" and is located in this country: US. This item can be shipped to United States, Canada.