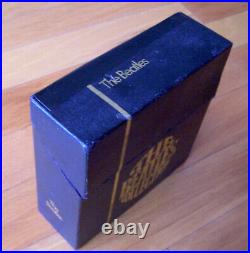 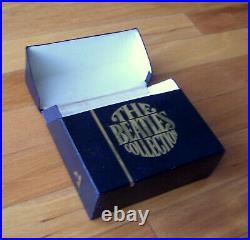 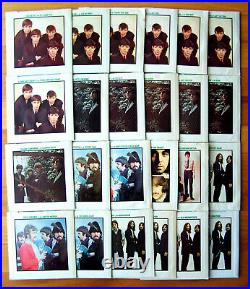 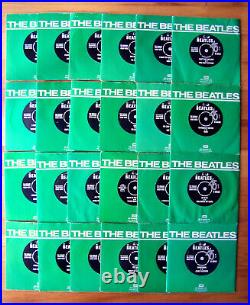 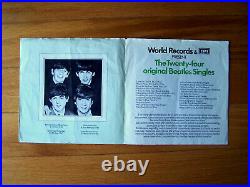 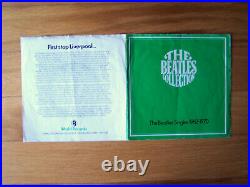 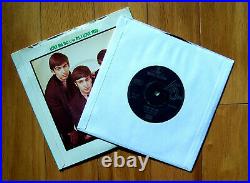 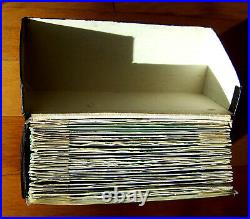 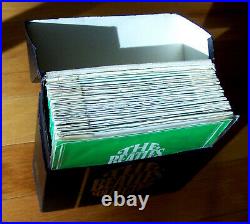 24 Vinyl records, 7inch, 45 rpm Singles Release. This lot includes the original dark midnight blue/black box that holds a set of 24 singles 7 vinyl records, originally released in 1976. This set contains the original "green back" sleeves on one side and photo pictures on the other side of the sleeves. NOTE: This set of the Singles Beatles Collection had been re-released several times over the years, and often an additional single was added.

That is why you see the set up to 27 records. But those sets that have more than 24 records are not the original release, and often they include records under the newer Apple label rather than the original Parlophone label. The original boxed set has "THE BEATLES COLLECTION" imprinted in gold letters in a circle on the front of the box.

(If the box that you see on other sites is different than the one pictured above, then it is a later release and not the first box set release). IN ADDITION , to the 24 records and box, there is the original 4-page brochure listing all the songs in the set. For extra record protection, I have placed each of the 24 records in a poly-lined white sleeve and then placed back in the picture sleeve. All the records and sleeves are in very good condition. The box itself is in very good condition, but the top flap has been taped on top for reinforcement. Photos shown are considered as part of and in addition to the description. This item is in the category "Music\Vinyl Records". The seller is "sky-blue-sky" and is located in this country: US. This item can be shipped to United States.