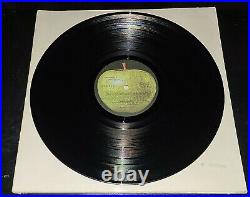 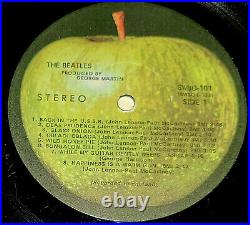 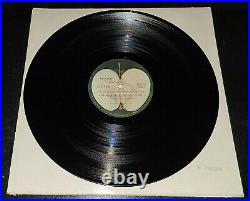 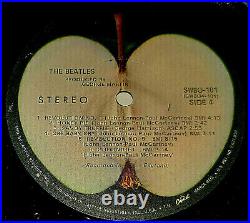 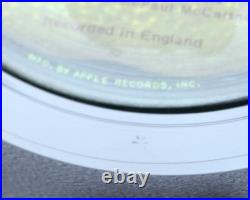 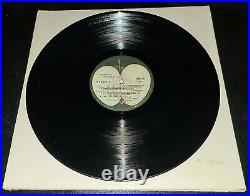 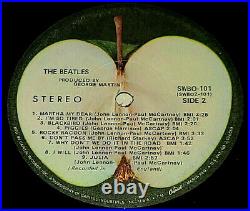 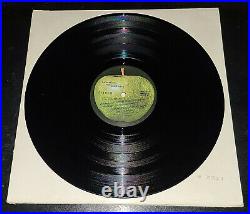 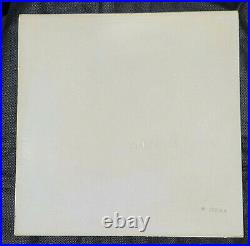 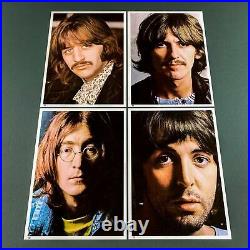 Los Angeles CA first pressing of The Beatles'White Album'. Incredible low very early A34/B35 Matrix stamps, which are documented as the very first pressings after George Harrison remastered the'Compressed White Album'. In addition, this is the rare and highly sought after pressing containing all 7 printing errors on the labels. Upon release of the album, John Lennon noticed these mistakes and had them corrected immediately on future pressings but not before some of these extremely rare error copies had already entered the marketplace. Now, if that isn't rare enough, side 4 is an UNBANDED Jacksonville Pressing SWBO-X4-101 with' O' stamped in the rim!! Sides 1, 2 and 3 are clearly an LA press SWBO-101, with the star stamped in all 3 rims! This is truly one of a kind, as I have never seen a White Album stamped by two different pressing plants!

Bruce Spizer was asked about this phenomenon and really had no answer, other then to say it was extremely rare. The very glossy LPs are VG/EX , with some scratches/scuffs, which you'd expect being 54 years old. The labels are nice, crisp and clean, with NO writing and NO stickers. The inner/outer spines are completely intact and look great!! The cover is NM with NO seam splits.

NO WRITING on the front, back or inside the sleeve , and NO WRITING on any of the record labels!! It will arrive with original thick-stock portrait photos, original poster, and original inner sleeves.

A machine stamped star on sides 1,2 and 3 indicates that the record was pressed at the Los Angeles California plant, while side 4 has the' O' stamped which means, only that side was pressed at the Jacksonville plant. If you'd like to see one of the rarest Beatles Album of all time, please take a peek at this: item# 125515001837. This is as nice as you'll see for sale with rare A/B stamps and 7 errors. All the photos you see above are completely undoctored and free from any Photoshop, and are of the EXACT treasures you will receive!

No White Album is perfect, but this one is exceptional. The cardboard used in the making of The White Album was extremely poor and susceptible to the seams easily separating, fading, soiling, ring wear, and both of the spines just disintegrating. Side 1: SWBO-1-101- A36 with.

You read all these numbers correctly!!!!!!! Here are all 7 song errors on the labels: 1. "Bungalow Bill" instead of "The Continuing Story of Bungalow Bill" 2. "Obladi Oblada" instead of "Ob-la-di Ob-la-da" 3. "Rocky Racoon" missing the second "C" in Raccoon 4.

"Why Don't we do it in the road" without the question mark? Error #7 without the question mark, is the rarest of all the 7 If you are ever lucky enough to find another for sale ever again, make sure error #7 is among them! Here's very invaluable information on how The Beatles White Albums were numbered, and the meaning behind all the sequences... The first 25 White Albums were numbered with an'A' prefix and then a series of zeros preceding the number e.

Numbers 26-99 were three digit numbers preceded with a zero and no prefix. Numbers 100 through approximately 209,999 were preceded with the correct number of zeroes to make them a seven digit number. (with no letter prefix ever used on these early numbers).

From 2,250,000 up to 3,000,000 the numbers are prefixed with the abbreviation for number i. On some of these the'o' in No. Is raised with the period below it instead of beside it. For the final numbers over 3,000,000 the numbers are prefixed with a wide'A. Please make sure the items you see above are exactly the items you are seeking to add to your collection...