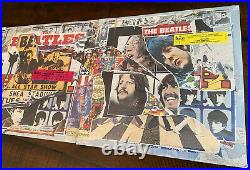 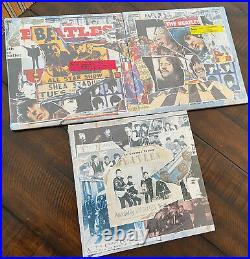 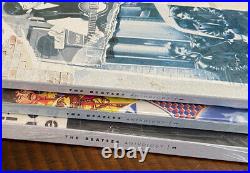 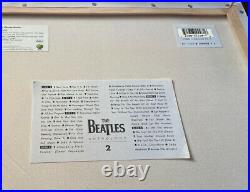 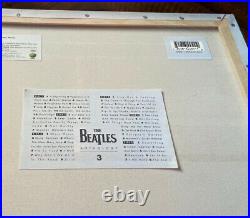 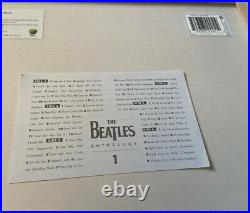 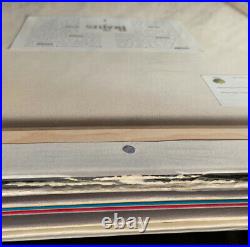 The Beatles ANTHOLOGY 1, 2, 3 SET of 9-LPs Factory Sealed MINT Condition OOP! Here is a genuine original COLLECTION OF THE THREE BEATLES ANTHOLOGY VINYL in SEALED MINT condition. These 3 TRIPLE albums (9 records total) are in the ORIGINAL PACKAGING AND HAVE NEVER BEEN OPENED! All of these albums are in pristine condition. However, Anthology 1, has some of the shrink wrap coming off on the top---please see pictures.

This is an amazing COLLECTION, a real collectors gem! No other band has had quite the same impact as the four lads from Liverpool.

Over the course of eight years and more than a dozen albums, the Beatles changed popular music and culture forever, spearheading the 1960s British Invasion and shaping rock & roll along the way. Along with their amazing musical output and unprecedented worldwide celebrity, John, Paul, George, and Ringo were responsible for many pop music revolutions, major and minor--writing their own material, pushing the limits of the studio, making films of their music, printing song lyrics on albums--that today are taken for granted. Although the Beatles disbanded in 1970, their artistic legacy is permanently ingrained in the entire world's musical vocabulary. The most anticipated of the Anthology series, this collection covers what was arguably the Fab Four's most intensely creative period ('65-'67) when they single-handedly changed the course of popular music. "Anthology 2" doesn't disappoint. Outtakes and demos show the building of songs such as "Strawberry Fields Forever" and Being for the Benefit of Mr. Kite, " while the pure pop song writing of "Rubber Soul" and "Help!

" is also documented, along with the sonic experimentation that characterized "Revolver. There is plenty for any Beatles fan. This documents the fractious Beatles years from 1968 to the end. Apple Records was launched ironically as the quartet were splintering into different units; to put it one way, they were increasingly solo artists appearing as session musicians on each others songs, or to look at it another way, they were already peering over the horizon at the post-Beatle world.

There were no reconstructed and heavily overdubbed demos from which to create'new' singles, but plenty of alternate takes from the white album, "Abbey Road", and "Let It Be" with John spoiling the seriousness of a run-through of the title track by cheerfully calling Paul a bounder and a cheat! As well as early versions of "All Things Must Pass" and "Not Guilty", which George wrote and later recorded properly on two of his solo albums in the 70s; and Paul's versions of "Step Inside Love" and "Come And Get It", which became hits respectively for Cilla Black and Badfinger.

The others include a rock'n'roll medly included during the difficult "Let It Be" sessions - Jive Bunny, Status Quo, you weren't the first, were you - and an amusing version of "Get Back", with Paul ad-libbing vocals at the end just as the police were coming to order them off the roof during that famous last live open-air performance in January 1969. The main exclusive is John Lennon's "What's the New Mary Jane", a much-hyped'rarity' which had been rumored as a possible Plastic Ono Band single at the time - featuring John, George, Yoko and roadie Mal Evans, but neither Paul nor Ringo.

All opened Albums are packaged with the record outside the jacket in a collector protector archival quality record sleeve; with the cover and record in a plastic sleeve with two rigid cardboard stiffeners inside the box to ensure no movement during transit. Please contact me directly if you have any questions or issues. This item is in the category "Music\Vinyl Records". The seller is "larrysvinyl" and is located in this country: US. This item can be shipped to United States.