The Beatles Let It Be 50th Anniversary 5 LP Box Set 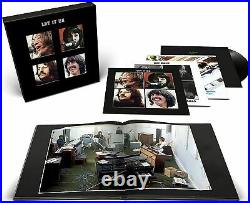 The Beatles - Let It Be 50th Anniversary 5 LP Box Set. The Let It Be album has been newly mixed by producer Giles Martin and engineer Sam Okell in stereo. All the new Let It Be releases feature the new stereo mix of the album as guided by the original reproduced for disc version by Phil Spector and sourced directly from the original session and rooftop performance eight-track tapes. The Super Deluxe collections also feature 27 previously unreleased session recordings, a four-track Let It Be EP, and the never before released 14-track Get Back stereo LP mix compiled by engineer Glyn Johns in May 1969. Additionally, the Super Deluxe editions feature a 100 page hard-back book with an introduction by Paul McCartney, extensive notes and track-by-track recording information and many previously unseen photos, personal notes, tape box images and more.

The Super Deluxe Vinyl Special Edition slipcase box set houses 4 LPs, a 12 EP, and a 105-page hardbound book in slipcase. The Beatles iconic final studio album being released to coincide with the worldwide release of Peter Jacksons 3 part documentary The Beatles: Get Back. New stereo mix of the original album by Giles Martin.

Additional discs featuring a selection of outtakes from the recording sessions. The item "The Beatles Let It Be 50th Anniversary 5 LP Box Set" is in sale since Wednesday, October 13, 2021.

This item is in the category "Music\Vinyl Records". The seller is "darto6816" and is located in Surrey.