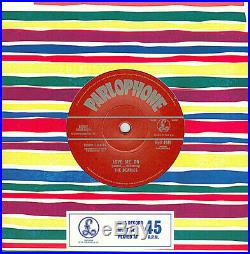 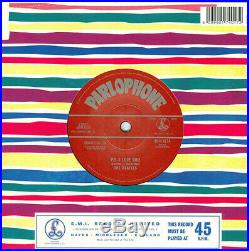 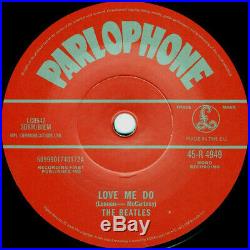 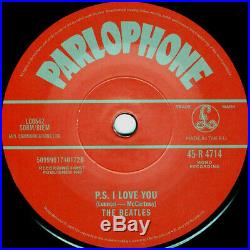 This is a 50th anniversary, 2012 Parlophone reissue of the first ever Beatles single that was WITHDRAWN by EMI because it features the Andy White drumming version instead of the proper Ringo one!! Housed in a reproduction Parlophone sleeve, both the record and the sleeve are TOTALLY MINT THROUGHOUT! Matrix / Runout (Side A stamped on runout): BC88258-OAAA. All my items are graded according to the Record Collectors grading system.

Mint: The record itself is in brand new condition with no surface marks or deterioration in sound quality. The cover and extra items such as the lyric sheet booklet or poster are in perfect condition. EX (Excellent): The record shows some signs of having been played but there is very little lessening in sound quality. The cover and packaging might have slight wear or creasing.

VG (Very Good): The record has obviously been played many times but displays no major deterioration in sound quality despite noticeable surface marks and the occasional light scratch. Normal wear and tear on the cover or extra items, without any major defects, is acceptable. Steel-Wheels is one of the most respected names in the music retail industry having traded successfully in 4 bricks and mortar shops in Newcastle and online for almost 25 years.

This item is in the category "Music\Records". The seller is "geordieboy53" and is located in NEWCASTLE UPON TYNE, Tyne and Wear. This item can be shipped worldwide.