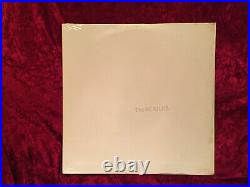 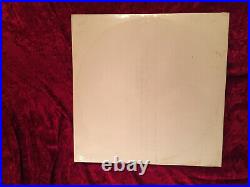 This is the 1968 Release of the Double LP popularly known as The White Album but which is officially known as The Beatles. This is either the late 1975 Apple release or the mid-1970s/early 1980s Capitol release , as both of these releases were manufactured with a posterboard cover and printing on the cover.

This is the definitive musical statement of The Beatles, not only because it is so vast and allows for so much variation of styles, but because it also shows a fully evolved Beatles, at the peak of their powers. This is also notable as the very First Beatles album on their own label, Apple Records, and incorporates many songs that were first conceived and written while The Beatles were on their erstwhile sojourn to India to study with Maharishi Mahesh Yogi. By the way, The Maharishi did his own album around this time! And that album is also available among my listings.... This is The Beatles' Motherlode and naturally, it's one of Rolling Stone's 500 Greatest Albums of All Time!!!

Allmusic gives it 5 stars!! All White Albums from this era includes the 4 beautiful glossy portraits of the Lads and the Poster with collage on one side and lyrics on the other. Nice high gloss on album cover.

Front and back of cover artwork and text are rich, clear and bright, with a tiny tear in the bottom right corner of the shrink, and micro tears in two of the other corners that I had to use a magnifying glass to see. Has a few light age spots, reasonable for a (white) album that is somewhere between 40-47 years old. Seams, corners and spine are solid and clean.

No splits in the cover seams. Spine print is crystal clear. Also, the record appears straight; when I look down with one eye down all 4 edges there's no big, ominous bow to it that would suggest that it's warped. I will gladly accept the return of Sealed records as long as they have not been opened i.

As long as they are still in the condition I sent them in. Yep, there are a few rotten apples out there!

I will not accept a previously sealed record that has been opened, even if the complaint is that the record is warped. This is why I look down the edge of all 4 sides of the record, to assess for potential bowing. Look for that in the description of the covers of all my Sealed items. By the way, I've never knock on wood! See my other listings for other Beatles & Related items.

I also have a treasure trove of Beatles LPs, 45s and memorabilia yet to be listed. Let me know what you're looking for.

I cover the cost for this, so it doesn't cost you anything extra. Do this for all of your selections and then go to your cart to checkout. All records are packaged securely with the vinyl outside the jacket (to avoid seam split in transit).

, ETC WITH THE ITEMS YOU WANT, AND CREATE A LISTING WITH THE EXACT WEIGHT OF YOUR LOT. OR, FEEL FREE TO ASK QUESTIONS.

Feel free to ask any questions and happy shopping! If you're unsatisfied, please let me know so we can resolve it. Each song on the sprawling double album The Beatles. Is an entity to itself, as the band touches on anything and everything it can.

This makes for a frustratingly scattershot record or a singularly gripping musical experience, depending on your view, but what makes the so-called White Album. Never before had a rock record been so self-reflective, or so ironic; the Beach Boys. Send-up Back in the U.

" and the British blooze parody "Yer Blues are delivered straight-faced, so it's never clear if these are affectionate tributes or wicked satires. Turns in two of his best ballads with "Dear Prudence" and "Julia"; scours the Abbey Road vaults for the musique concrète collage "Revolution 9"; pours on the schmaltz for Ringo.

S closing number, "Good Night"; celebrates the Beatles. Cult with "Glass Onion"; and, with "Cry Baby Cry, " rivals Syd Barrett. Doesn't reach quite as far, yet his songs are stunning -- the music hall romp "Honey Pie, " the mock country of "Rocky Raccoon, " the ska-inflected "Ob-La-Di, Ob-La-Da, " and the proto-metal roar of Helter Skelter. Two main songwriting forces were no longer on the same page, but neither were George. Still had just two songs per LP, but it's clear from "While My Guitar Gently Weeps, " the canned soul of "Savoy Truffle, " the haunting "Long, Long, Long, " and even the silly "Piggies" that he had developed into a songwriter who deserved wider exposure.

Turns in a delight with his first original, the lumbering country-carnival stomp Don't Pass Me By. None of it sounds like it was meant to share album space together, but somehow The Beatles. Creates its own style and sound through its mess. This item is in the category "Music\Vinyl Records".