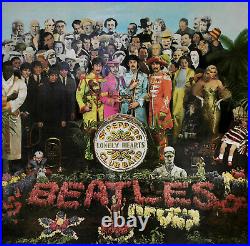 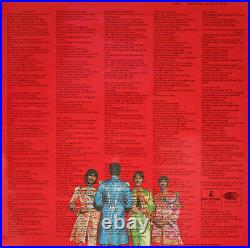 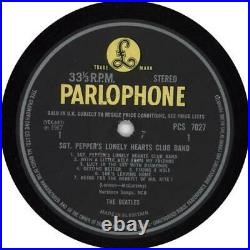 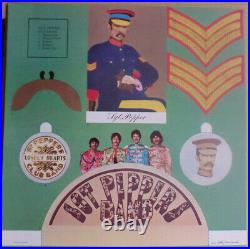 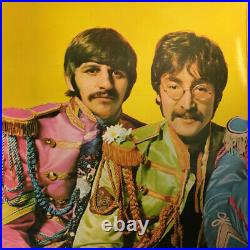 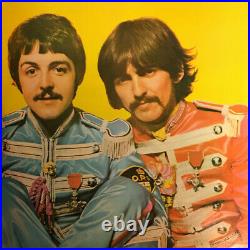 SGT PEPPERS LONELY HEARTS CLUB BAND. YEAR OF RELEASE: - 1967. The sleeve has crisp, clean laminate, secure flipbacks and vibrant colours and just the very lightest of light shelfwear. The labels are bright and clean and reveal no spindle marks, the vinyl itself as NEAR MINT as it is possible to get. MATRICES:- YEX 637-1 YEX 638-1.

All my items are graded according to the Record Collectors grading system. M (Mint): The record itself is in brand new condition with no surface marks or deterioration in sound quality. The cover and the extra items such as the lyric sheet, booklet or poster are in perfect condition. EX (Excellent): The record shows some signs of having been played but there is very little lessening in sound quality. The cover and packaging might have slight wear and/or creasing. VG (Very Good): The record has obviously been played many times but displays no major deterioration in sound quality despite noticeable surface marks and the occasional light scratch. Normal wear and tear on the cover or extra items, without any major defects, is acceptable. G (Good): The record has been played so much that the sound quality has noticeably deteriorated, perhaps with some distortion and mild scratches. The cover and contents suffer from folding, scuffing of edges, spine splits, discolouration etc. F (Fair): The record is still just playable but has not been cared for properly and displays considerable surface noise; it may even jump. The cover and contents will be torn, stained and/or defaced. Steel-Wheels is one of the most respected names in the music retail industry having traded successfully in 5 bricks and mortar shops in Newcastle upon Tyne and online for over 25 years.

Our UK warehouse is stacked from floor to ceiling with bulging racks of vintage vinyl and CD goodies. We have an ever evolving collection of sought after memorabilia and autographs too! Pepper's Lonely Hearts Club BandRare 1967UK 1st press vinyl LP" is in sale since Friday, February 5, 2021. This item is in the category "Music\Records".