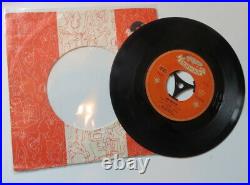 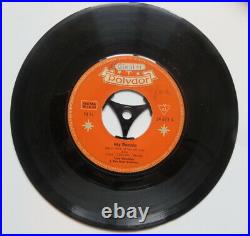 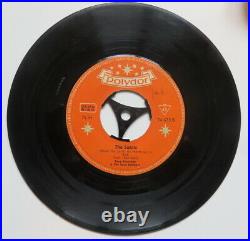 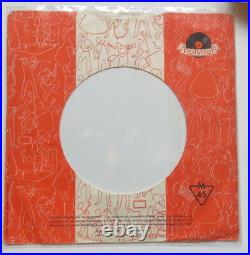 TONY SHERIDAN AND THE BEAT BROTHERS. 1st PRESS WITH'GERMAN INTRO. THE FIRST BEATLES COMMERCIAL RECORD RELEASE EVER. This single with the slow German introduction to "My Bonnie" is. The Beatles' first commercial record.

The Beatles met Tony Sheridan during their first Hamburg trip in 1960, though they didn't perform together. The next year, however, saw them alternating with Sheridan's band, and occasionally backing him. Following one of these performances, a friend of orchestral leader Bert Kaempfert - also an agent for the Polydor label - recommended them for a recording session. The sessions probably took place on 22th. June 1961, on a school stage at Hamburg's Friedrich-Ebert-Halle school.

A number of songs were recorded, including My Bonnie, which Polydor chose to release as a single in Germany. The B-side was The Saints, a beat version of When The Saints Go Marching In. The single, credited to Tony Sheridan and The Beat Brothers, was released on 23th. October 1961, and reached number five in the German charts. With The Beatles' fanbase growing in Liverpool, demand grew for imported copies of My Bonnie. The buzz around the single inspired Brian Epstein to seek out the group, which he went on to manage. The Polydor Orange Scroll logomark was printed at the top of the label. Press comany's name "DEUTSCHEN GRAMMOPHON GESELLSCAFT" was printed at the perimeter. The letters "M 45" Mono 45 R. In the triangle were printed on the right of the label. "GEMA/BIEM" was printed in the Box.

The A-side of the label has the text. Mein Herz ist bei dir nur. " under the title "My Bonnie. A RARE COLLECTOR'S ITEM! The recording of "My Bonnie / The Saints" was released in three official versions, plus a version produced in errror.

Side 2 2K1 H/S O(on its side) 24673-2 B Made in Germany. THE VINYL IS IN VERY GOOD/VERY GOOD PLUS CONDITION. VINYL HAS MULTIPLE LIGHT WISPY HAIRLINE SLEEVE ENTRY MARKS/SCUFFS.

SLEEVE IS STORED IN ITS OWN POLY BAG. THIS FIRST PRESSING FROM OCTOBER 1961 HAD THIS COMPANY SLEEVE, THE FIRST PICTURE SLEEVE BEING RELEASED IN 1962 WITHOUT'TWIST' IN THE WHITE LEFT HAND BOX ON THE FRONTSIDE OF THE SLEEVE. THE RECORD HAS BEEN CLEANED ON A VACUUM RECORD CLEANING MACHINE. THE RECORD IS SUPPLIED IN AN ANTI-STATIC PLASTIC SLEEVE.

Certainly never played, possibly even still sealed. Should be used sparingly as a grade, if at all. Cover and extra documents like lyric sheet, booklet or poster are in perfect condition.

Describes an almost mint record, this grade is used for records that appear virtually flawless but not perfect. A very minor scuff can appear on the record. Yet, the record must play without any noise over the flaw and the latter must be very hard to detect. Any blemish affecting sound quality will prevent records from being graded NM or M. The cover should look close to perfect with only minor signs of wear and or age. Minor impressions to the cover (due to the outer edge of the record resting inside) may be acceptable.

It has no creases, folds, seam splits or any other noticeable similar defect. And of course, the same is true of any other inserts, such as posters, lyric sleeves, and the like.

Basically, Near Mint looks as if you just got it home from a new record store and removed the shrink wrap. Most common condition for records. The record has been played a few times but displays no major deterioration in sound quality. May have some very light surface noise or isolated crackles and pops.

Some slight signs of wear, occasional light marks and scuffs. The average person would not notice anything wrong. Labels may be marked lightly. Minor ring wear, moderate wear to edges and corners.

Cover can also be in mint condition but there is a DJ or promo copy stamp or cut in the corner. You can notice some clear wear on the surface. Some scratches that may cause clicks, crackles or pops. There may be minor warps and skips. Cover suffers from folding, scuffing of edges, spine splits, discoloration. Cover will have ring wear.

The record has been played so much that the sound quality has been noticeably deteriorated. Likely to be lots of minor scratches and scuffs. Potential label marks and damage. The cover and contents can be torn, stained and/or defaced, there also can be some writing on it.

The record does not play properly due to scratches, bad surface noise, etc, Unless it is something very rare it is not worth listing in this condition. The cover and contents are badly damaged or partly missing. Cover can also be missing. Rare The Beatles Collection 13 x LPs, 1978, Box Set, BC 13. THE BEATLES PLEASE PLEASE ME LP UK FIRST PRESSING GOLD LABEL VINYL LP PMC 1202.