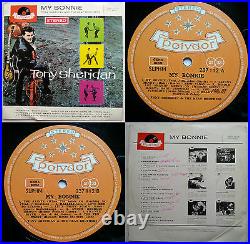 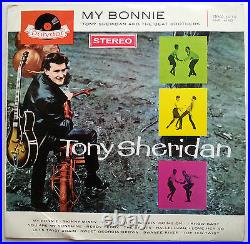 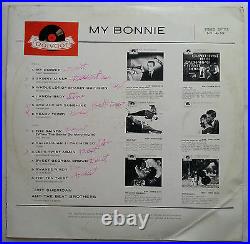 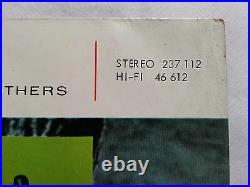 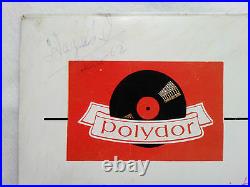 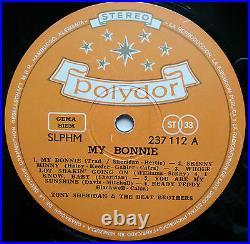 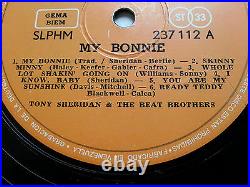 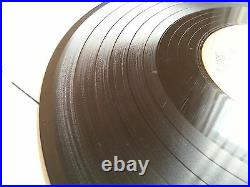 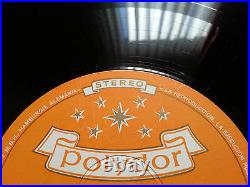 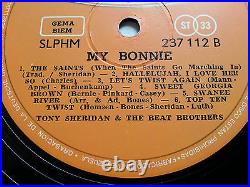 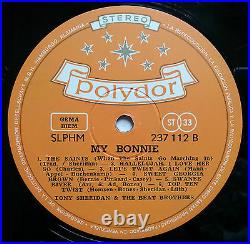 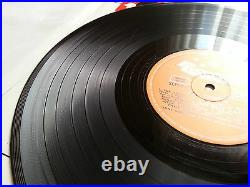 FROM CHILE (South America) FOR COLLECTORS WORLDWIDE. ALL OUR RECORDS ARE PLAY TESTED AND THEY ARE IN GREAT CONDITION.

TONY SHERIDAN AND THE BEAT BROTHERS. ULTRA MEGARARE and HARD-TO-FIND original very first STEREO press released in Venezuela in 1962 by Polydor Records, licensed from the Deutsche Grammophon Gesellschaft M. Hamburg, Germany, catalog number SLPHM 237 112, with machine etched matrix numbers 237112 A C2 HI/S + in Side A and 237112 B C2 HI/S + in Side B, with traditional orange/black Polydor Records labels, with White Polydor scroll logo and silver Stereo lettering and stars. Yes, Sirs, ANOTHER FIND from this side of the world!! MY BONNIE by Tony Sheridan And The Beat Brothers was originally released in Germany in January 1962 and as you all must know, in this album Tony Sheridan was backed by The Beatles, the song My Bonnie and The Saints are informed accompanied by The Beatles.

In Venezuela this LP was released in 1962 in both Mono and Stereo version, with Stereo version in so limited quantity that its almost imposible to find (Ive seen this LP offered before but with Stereo cover and Mono record, so beware, this is the authentic Stereo cover with correct Stereo record). Not sure the exact date it was released in Venezuela but in back cover its written the name of the original owner and the date July - 62, sure the date this copy was bought. The cover is made with a single piece of a very thin cardboard folded in the middle with back cover pasted on the flips of front cover and a very thin spine with the album title only. Front and back covers keep strictly the original German artwork with all the text written in English only, the only difference is the catalog number at top right corner and the text Stereo in the front cover and the line Printed in Germany is omitted, in this cover you dont see any reference to Venezuela. In labels the album title and tracklist are written in English only, with full credits for songwriters.

In the rim text you can read in Spanish Made In Venezuela. Yes, Sirs, this is ANOTHER GREAT FIND for all The Beatles lovers, fans and collectors, a record almost never seen, in this very first Stereo press released in Venezuela the same year it was released in Germany!!! The cover was already described and its in great VG+ or EX- condition, clean and clear, complete, with some wear in edges, more evident in corners, with a little rip in the mouth edge, very light ring mark and some creases, a bend at the bottom right corner, with some writings in back cover, faint blemishes and some age browning, with the flap partially unglued at top edge, but with all edges solid and firm with no seam splits at all, whichs a real miracle for this so fragile cover.

The record is in great VG or VG+ condition both sides, glossy and clean, with scuffs, light hairlines and some faint scratches, which dont affect play at all. Labels on both sides are in absolute NM- or NM condition, absolutely clean and clear, with only minimal spindle hole wear. The sound is in absolute VG or VG+ condition both sides, loud, clear and clean, virtually no background noise (surface noise is normal in records from Chile), but constant soft crackles and occasional faint pops, more evident in the silent parts between songs and in the introductory lines of My Bonnie and Swanee River, which of course dont cause any distraction from the great sound this album keeps from the beginning to the end. Overall, this is not a record for strict Minty minds or audiophiles, but sure its still a record with a nice cover, glossy record, almost immaculate labels and still with a great sound quality after about 59 years, which wont disappoint anyone!!

Yes, Sirs, My Bonnie by Tony Sheridan & The Beat Brothers (THE BEATLES) in this very first Stereo press released in Venezuela in 1962!!! A record almost never seen and A MUST FOR ALL THE BEATLES COLLECTORS!!! We dont use the generic VG most of South American sellers use to hide poor quality conditions or NM or Mint for records which arent even clean and sound less than a normal VG in professional standards.

We use the Record Collectors Grading System with a little modification: we dont use MINT grade but for Sealed records and we can use a + or to show a most professional accurate description. MINT (M): I only use this grade for Sealed records. NEAR MINT (NM): The record itself is in like new condition with no surface marks or deterioration in sound quality (only some very very very light hairlines caused for the record rubbing the sleeve). The cover and any extra items such as the lyric sheet, booklet or poster are in like perfect condition.

EXCELLENT (EX): The record shows some signs of having been played, but there is very little lessening in sound quality, maybe some surface marks which doesnt affect play. The cover and packaging might have slight wear and/or creasing. VERY GOOD (VG): The record has obviously been played many times, but displays no major deterioration in sound quality, despite noticeable surface marks and the occasional light scratch.

Normal wear and tear on the cover or extra items, without any major defects, is acceptable. GOOD (G): The record has been played so much that the sound quality has noticeably deteriorated, perhaps with some distortion and mild scratches. The cover and contents suffer from folding, scuffing of edges, spine splits, discoloration, etc. FAIR (F): The record is still just playable but has not been cared for properly and displays considerable surface noise; it may even jump.

GBP10 for one 7 record. We dont have anything to hide and we know the buyers expect to receive feedback after to pay for the items they win. Most of sellers say to give feedback when buyers leave feedback first.

But we know thats not fair for buyers. The records for sale are used and if you know about records then you will already know that they behave differently on different turntables, therefore there is NO GUARANTEE on them, but I do my best to grade them as accurately as possible and every flaw I listen on my turntable it's informed in description. Check out my other RARE AND HARD-TO-FIND records. From Chile and South America.

The item "TONY SHERIDAN THE BEAT BROTHERS (BEATLES) MY BONNIE 1962 STEREO VENEZUELA PRESS" is in sale since Thursday, August 10, 2017. This item is in the category "Music\Vinyl Records". The seller is "soul_assault" and is located in Concepcion. This item can be shipped worldwide.